PROJECT DESCRIPTION
Alvine Engineering provided engineering systems design for the renovation of Building 21, the historic Mule Barn. The building was built in 1910 and originally used by the Army as a stable for mules that moved freight, supplies, and equipment.

Metropolitan Community College acquired the building in 1975 and used it for construction technology and auto body classes, which have since moved to other locations. The renovation began by gutting the interior of the building for the replacement of electrical, mechanical, and plumbing systems to meet code and modern demands. The Mule Barn is now a mixed-use facility with classrooms, offices, meeting areas, and a public lounge with an adjacent outdoor patio. 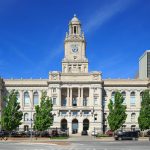