Completed in 1932, the Nebraska State Capitol has a three-story base pedestal and a high-rise tower ending in a dome 400 feet above the ground. The high-rise has seen many renovations, but the latest restores its original beauty.

A national historic landmark, the Nebraska State Capitol has many ornate areas that reflect its original 1920s aesthetic, including lighting fixtures, ductwork, and mosaic murals. Unfortunately, previous renovations introduced additional heating, ventilation, and air conditioning (HVAC) ductwork, piping, and the associated drop ceilings, soffits, and chases which covered some historic features. In 2014, a 10-year renovation kicked off to once again update the HVAC system, only this time, the building’s history was at the forefront of design.

For Capitol leadership, restoring and reusing original features was a priority. Where possible, the 1920s ductwork, lighting fixtures, and other original elements were retained, cleaned, and reused. The original copper ductwork that leads to the third-floor roof hoods and original round supply air grilles in the Appellate Court were some of the features restored and reused.

Recovering lost volumes of space has been a recurring challenge throughout the State Capitol historic preservation project. The building’s overall structure makes routing ducts through the space very challenging. In the Capitol’s first floor corridors, the clunky 1960s ductwork couldn’t fit above the original plaster ceiling, so the ductwork was installed below the historic plaster, which required an additional drop ceiling.

A new water-cooled geothermal variable refrigerant flow (VRF) system is now used in the Capitol’s HVAC system, which supports piping and minimizes the use of ducts. This makes it more adaptable to historic structures than traditional air handling units and allowed the team to remove the ducted HVAC system from 1964. As a result, the original plaster ceilings and crown moldings hidden for over 50 years were exposed and restored.

In order to make these improvements constructible, the Alvine Engineering team needed to design HVAC equipment to be carried up narrow stairs and through temporary wall openings to get to third-floor mechanical rooms. The team also designed mechanical, electrical, plumbing, and fire protection systems in the second-floor attic spaces to allow for a new catwalk system. The catwalk will not only improve access to the equipment, but protect the historic coffered plaster ceilings below by limiting their exposure to foot traffic.

“The location of the new VRF cabinets…finally allow the newly-restored multi-pane windows to reach the floor, not only admitting more light to the occupants and visually improving these rooms tremendously, but these windows are operable for the first time since the early 1960s…this is outstanding.”

Fire protection in historical preservation spaces is especially difficult because many factors have to be considered. These spaces must be protected, not only from fire and smoke damage, but water damage, as well. In the Nebraska State Capitol, many water-sensitive areas use a mix of air sampling smoke detection (ASSD) and traditional fire alarm systems instead of standard wet-pipe systems.

In the areas that do use fire sprinklers, special care is taken to ensure the sprinkler heads don’t distract from the original historical aesthetic of the space. To accomplish this, a combination of sprinkler heads are used, including horizontal sidewall and recessed pendent versions.

The team engineered fire sprinkler systems for three base floors and, in a future phase, will add sprinkler systems to some tower floors not previously sprinklered. Additional fire protection work is planned and being completed for sprinkler installation in other unprotected areas such as mechanical rooms, some basement areas, and non-public parts of tower floors.

Office of the Capitol Commission staff appreciate the improved equipment and restored history. “The placement of the ceiling air grilles and location and placement of the new LED fixtures look so improved. A person’s eye is barely drawn to what used to be a clumsy array of unsightly old fixtures and fittings,” Capitol Administrator Robert C. Ripley, FAIA comments regarding the restoration work in the Law Library and adjacent office spaces. “Also, the location of the new VRF cabinets…finally allow the newly-restored multi-pane windows to reach the floor, not only admitting more light to the occupants and visually improving these rooms tremendously, but these windows are operable for the first time since the early 1960s…this is spectacular. The new VRF cabinets allow for the return of 5,000+ SF of office space to active use throughout the building!”

The Nebraska State Capitol is the home of the State Supreme and Appellate Courts, Governor’s office suite, Legislative Chambers, offices, and other essential services. Not only that, but the delicate antique fixtures, mosaics, and other historical pieces that couldn’t be moved still needed a regulated environment. This meant shutting down the entire building for any length of time, even for construction, was not an option.

Instead, the team developed a construction phasing sequence to allow each part of the complex HVAC system to be replaced piece by piece. This required extensive planning and coordination between all team members throughout each phase to keep the existing systems operating while new systems were installed.

WHERE CAN I LEARN MORE?

Check out our article, “What is Historic Preservation Engineering?” and learn more about the projects that our team have helped restore their historical integrity. 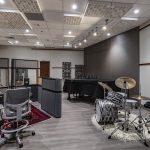