Oklahoma State University (OSU) needed a new facility to continue recruiting musical talent from around the world and noise from building systems was not an option. The Michael and Anne Greenwood School of Music, the new home for OSU’s music program, was designed to support musical and vocal performance wherever possible. This meant the design team needed to limit unwanted sound transmission at every opportunity and provide optimal conditions for various instruments.

Not Seen, Not Heard

The Alvine Engineering team took many steps to be sure the mechanical, electrical, and plumbing (MEP) systems addressed sound attenuation concerns. For instance, all MEP systems were routed down the central corridor and supplied various spaces from the central spine to prevent sound energy from transferring between acoustically sensitive spaces. It was important that no MEP systems touch any acoustical partitions or structure. When a duct transfers through an acoustical partition, the drywall/stud opening is slightly larger with mineral fiber and acoustical sealant around the perimeter. Vertical sanitary lines and roof drains were braced to non-acoustical walls to prevent transferring sound energy.

“Mechanical systems often produce the most excess sound energy out of all the building systems,” Scott Sanders, P.E., a project manager at Alvine Engineering, explains. “Because of this, we had to be especially flexible and creative to come up with new ideas to meet the needs of the building, architecture, occupants, music program, and sound attenuation.”

For example, air handling units were factory tested for discharge and radiant sound power levels before installation. Spring isolators limit the sound transmission from rotating mechanical equipment into the structure. Sound attenuators and internally-lined ductwork in supply, return, and exhaust ductwork limit duct-transmitted fan sound. Water velocities in piping and air velocities in ductwork are limited to minimize breakout sound. Even storm water and sanitary drainage is insulated to eliminate breakout noise in these systems.

All of the equipment for the HVAC system is housed in its own separate room to isolate the considerable noise made while operating. Ductwork for the building needed to be a certain length to attenuate sound before going into a room, which called for much more ductwork than would normally be used in a building of this size. Alvine Engineering overcame this challenge by finding creative ways to fit all ductwork within the set aesthetic of the space. Additionally, the ductwork is larger than what would normally be designed to minimize velocity and sound associated with a higher velocity system. All ductwork joints were then sealed to eliminate hissing noises that can occur from air leaking from a duct.

“Alvine [Engineering] is a team player…they listen to both the design team and the owner, finding mutually beneficial solutions for the project.”

Rehearsing in a Sound Isolation Box

Mechanical systems and equipment for the rooms had to go between the acoustical clouds and the barrier ceiling, while still being supported structurally. By working with the structural engineer, Alvine Engineering identified strategic areas in which the mechanical equipment could be secured to the barrier ceiling. In the rehearsal rooms where the ceiling is not continuous for acoustic reasons, systems that could be visible were painted black, making them nearly unnoticeable.

Even the lighting was integrated into each space to limit sound transmission as much as possible. The luminaires chosen have a lens that does not vibrate in the housing and drivers that do not produce humming sounds. To maintain acoustical performance across the stretch of the ceiling in each practice room, luminaires were suspended instead of mounted in the ceiling.

Electrically, there were strict requirements regarding where wiring could and could not be routed. For instance, wiring could not run between practice rooms in an effort to limit sound transmission between the rooms. Certain walls were curved slightly to improve acoustics, so the Alvine Engineering team needed to adapt electrical boxes accordingly. Any electrical outlets in the same wall serving the individual spaces on either side had to be spaced a minimum of 24” apart horizontally. Putty pads were then used for isolation to keep sound from transmitting from one space to another.

Steinway pianos are found throughout the Michael and Anne Greenwood School of Music. To keep the space optimal for these especially sensitive instruments, space relative humidity in the rehearsal rooms, as well as other spaces in the facility, is measured along with temperature. The building control system calculates the space dew point, and in cases of low dew point in the space, triggers the humidifier in the air handling unit. In case of high dew point, it triggers a dehumidification sequence to maintain the space relative humidity.

A Tale of Two Buildings

What can we help you with? 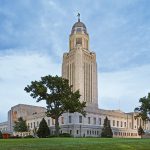