PROJECT DESCRIPTION
In response to increased student demand and widespread county growth, the Canadian Valley Technology Center (CVTC) was granted a renovation and addition to their Cowan Campus. The Dr. Earl Cowan Campus expansion is located in Yukon and is home to the dedicated health care education program. This program has seen an increased enrollment demand of 30 percent over the years. Other programs that were added to the facility include, bio-med, nursing, surgery technology, dental, and more. 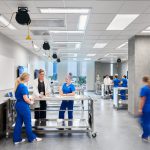 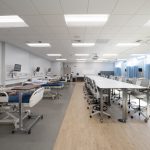